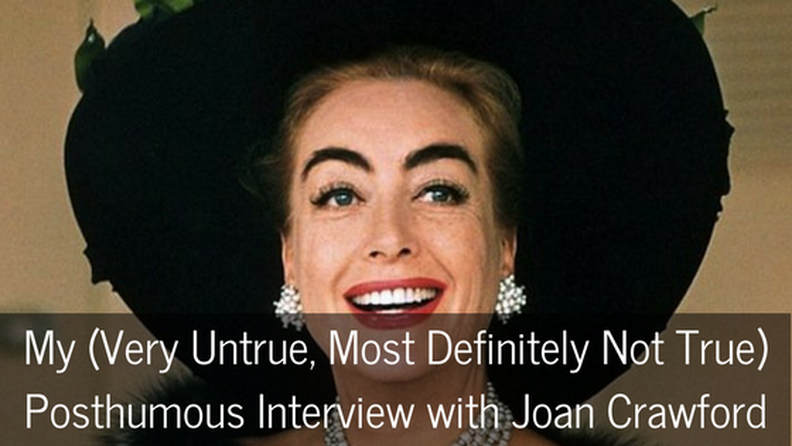 ​On the 41st anniversary of the death of movie star Joan Crawford, I had the very untrue, totally fake, 100% completely made up pleasure of interviewing her, posthumously.  In this brief, candid and totally bogus interview, Joan spills the deets on her loves, her family life and that infamous feud.
​

My (Very Untrue, Most Definitely Not True) Posthumous Interview With Joan Crawford

​Me:  Ms. Crawford, it's an honor and a privilege to interview you today.  I appreciate you taking the time out of your no-doubt busy schedule.  May I call you Joan?

Me:  Absolutely! Lucille it is.  Now I just have to ask: what year, exactly, were you born?

Lucille:  Oh, dear.  I'm going to have to assert my 5th amendment privilege toward that line of questioning--we have rights here in the great beyond too, you know (smiles slyly).

Me:  Definitely Ms. Craw--er, Lucille.  I completely understand.  Most of your relatives and all of your past loves must have reunited with you by now.  Is there any rivalry?

Lucille:  Well I'll tell you, it's nice to see Christopher and Cindy getting along so well--they had quite a strained relationship while earthbound.  And my brother Hal isn't nearly as big a Dottie's man as he once was, though he does have his moments.
​
Lucille:  Every one of my husbands was the right man at the right time.  Except for maybe Phillip Terry; a very nice man but maybe a little too nice, if you know what I mean.  And Al Steele was definitely the right man at the right time.  We had so many plans and such a bright future, but it was just not mean to be.

Me:  Any secret loves?

Lucille:  (smiles coyly) A girl never kisses and tells.
​
Me:  A definite dog-eared page turner, for sure!  You know, I have to ask you, Lucille--what did you think about Christina's book, "Mommie Dearest"?

​Lucille:  Well, I'd have to thank her for giving me an alternative to wee wee pads for the pups, that's for sure.  Other than that, I have no opinion.  She was always a strong-willed child with her own ideas and opinions and I didn't think she'd change just because I passed on.

Me:  Is there anything you'd like to say to Tina when you meet again?

Lucille:  Oh, I don't know--do you think we'll ever meet again?  It seems like that old slag is hanging on longer than I have! (laughs)

Me:  HA!  Speaking of old slags--have you seen Bette around?

Lucille:  The last time I saw Bette, she was doing her best eye roll at Saint Peter for mispronouncing "Bette".  She hates that, you know.

Me:  Did you have an opportunity to discuss Ryan Murphy's "Feud" with her?

Lucille:  Oh no, it's not necessary--we lived it, after all.  I will say that I found it to be a truer depiction of Ms. Davis than of myself, but much like my daughter Christina, I know a thing or two about "creative licensing".

Me:  One last thing before I let you go.  I understand that you loved to cook and entertain, and there are many recipes of yours that can still be found on the internet.  However, there's one I just can't find:  your recipe for floating island.  Just what is that???

Lucille:  Ah, my floating island.  We'll have to save that for another time, dear--I hear Al fixing vodka-Pepsi's.  In the meantime, try my french banana salad, won't you?
Rest in paradise, Lucille Fay LeSueur Cassin Crawford Fairbanks Tone Terry Steele; I hope one day we really will meet and have a chance to chat, and I'll get that damn recipe once and for all!
You May Also Like:​​​
Comment Box is loading comments...